EASLCE Webinar Spring 2015
May 21st at 7pm CEST
With Prof. Heather I. Sullivan
The Dark Pastoral 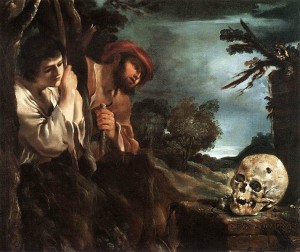 As a trope, the “dark pastoral” engages the controversy in ecocriticism and environmentalism about which cultural forms are most productive for re-imagining the human and non-human interactions in the Anthropocene during what appears to be the Earth’s sixth major extinction. Like other new forms of the pastoral such as Terry Gifford’s post-pastoral, the necropastoral in recent poetry, David Farrier’s toxic pastoral, Greg Garrard’s radical pastoral, and the urban pastoral, the dark pastoral evokes the traditional idyllic form’s possible alternative to our current petro-cultural consumer societies while attempting to avoid both sentimentalized views of static nature and also the naturalization of existing power structures. The dark pastoral, as I describe it in several recent essays (listed below), documents along with material ecocriticism how we are always in “nature”—as in the activities of matter—whether in the built environment or elsewhere. This is, however, the “new nature” of the Anthropocene, that is, a world in which every part of the planet’s surface contains traces, whether microscopic or massively structural, of anthropogenic activity. The seemingly bucolic agricultural or even wild spaces on Earth have also been re-shaped by industrial processes and the impact of burning fossil fuels. In our world fueled by oil, coal, and gas, the dark pastoral builds on material ecocriticism’s discussion of agentic and semiotic matter, and on Timothy Morton’s concept of “dark ecology.” The dark pastoral thus addresses the green biospheric “mesh” dripping with oil together with the long-term cultural insights and provocative tensions of the pastoral’s three-thousand-year traditions described in Ken Hiltner’s 2011 What Else is Pastoral: Renaissance Literature and the Environment? and Gifford’s Pastoral. In short, the dark pastoral highlights the double movement inherent in most all pastoral forms: in its often idealized green landscapes, the pastoral’s documentation of natural species and country life simultaneously portrays a looming sense of the seemingly distant city, crowds, politics, and power. The dark pastoral emerges from these tensions in the environmental humanities and our cultural practices and makes overt the material connections.

This EASLCE Webinar will address the ecocritical debate regarding the pastoral as inevitably environmental or troublingly idealized and outdated, yet will focus primarily on the expanding options of the pastoral in ecocriticism such as the post-pastoral, the necro-pastoral, the toxic, radical, and urban pastoral, and the dark pastoral. Participants are invited to read a select set of essays with the following questions in mind: