In the #BifrostOnline guest blog environmental humanities scholar Serpil Oppermann looks at fiction of human bioturbation and unpacks what we are beginning to understand about the risks involved in changing subterranean environments as we extract resources ever more aggressively. 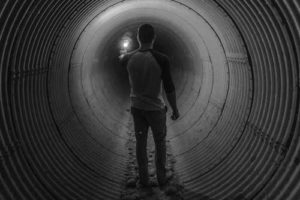 Climate change is an expected other-than-human visitor, a careening material agent voluntarily raised and nurtured by our disruptive practices of exploiting more and more of the planet, and it is not going to leave anytime soon. Timothy Morton calls this excess of economic hubris in plundering and colonizing the earth “an anthropocentric colonization protocol” (Morton, Dark Ecology, 10-11). Despite the evidence that the planet is “warming over land greater than 1.5°C” (Huntingford and Mercado, Nature, 27 July 2016, 5), why isn’t there enough political determination to unseat the main driver of climate change, the fossil fuel economy, or at least to enkindle global agreement in decarbonization policies?  The answer lies in the controversial data about temperatures that seem to be lower than estimates by most climate models (below 2°C). As ecologists Chris Huntingford and Lina M. Mercado explain, “oceans currently provide a significant thermal inertia of many decades” (2016, 1), meaning that the oceans absorb the surplus of CO2 in the atmosphere, keeping it several decades before releasing it back into the air. This interval of time creates the illusion that “all’s well,” making politicians readily ignore the inundating effects of human carbonization protocols. Read More on Bitfrost